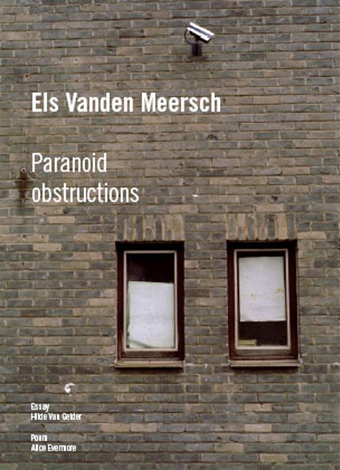 In this photo book, Els Vanden Meersch investigates the latent presence of violence and dominance in the everyday reality of the urban fabric. Subtle images contain combinations of banal details, through which emerges a restrained tension that points at the paranoid as it is felt in architecture. Control mechanisms such as surveillance camera's, spy holes and rear-view mirrors are set against one another. They gradually raise the stakes towards displaying an impenetrable control system that is built on the principles of military architecture, sophisticated technology and compelling viewing apparatuses. In this machine of anxiety, both the operator of the system and its target remain invisible. An aimless matrix of meaning appears, in which a mirror reveals as much as a dead-end corridor. In an astutely accurate way, Paranoid obstructions offers a representation of what cannot be outspoken nor imagined but which inevitably has happened. Paranoid obstructions also contains an essay by Hilde Van Gelder and a poem by Alice Evermore.